Comparison of tropical cyclogenesis indices on seasonal to interannual timescales 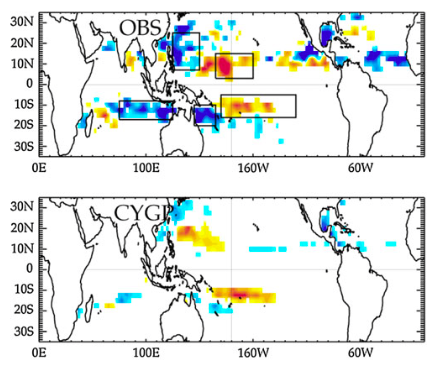 This paper evaluates the performances of four cyclogenesis indices against observed tropical cyclone genesis on a global scale over the period 1979–2001. These indices are: the Genesis Potential Index; the Yearly Genesis Parameter; the Modified Yearly Convective Genesis Potential Index; and the Tippett et al. Index (J Clim, 2011), hereafter referred to as TCS. Choosing ERA40, NCEP2, NCEP or JRA25 reanalysis to calculate these indices can yield regional differences but overall does not change the main conclusions arising from this study. By contrast, differences between indices are large and vary depending on the regions and on the timescales considered. All indices except the TCS show an equatorward bias in mean cyclogenesis, especially in the northern hemisphere where this bias can reach 5°. Mean simulated genesis numbers for all indices exhibit large regional discrepancies, which can commonly reach up to ±50%. For the seasonal timescales on which the indices are historically fitted, performances also vary widely in terms of amplitude although in general they all reproduce the cyclogenesis seasonality adequately. At the seasonal scale, the TCS seems to be the best fitted index overall. The most striking feature at interannual scales is the inability of all indices to reproduce the observed cyclogenesis amplitude. The indices also lack the ability to reproduce the general interannual phase variability, but they do, however, acceptably reproduce the phase variability linked to El Niño/Southern Oscillation (ENSO)—a major driver of tropical cyclones interannual variations. In terms of cyclogenesis mechanisms that can be inferred from the analysis of the index terms, there are wide variations from one index to another at seasonal and interannual timescales and caution is advised when using these terms from one index only. They do, however, show a very good coherence at ENSO scale thus inspiring confidence in the mechanism interpretations that can be obtained by the use of any index. Finally, part of the gap between the observed and simulated cyclogenesis amplitudes may be attributable to stochastic processes, which cannot be inferred from environmental indices that only represent a potential for cyclogenesis.