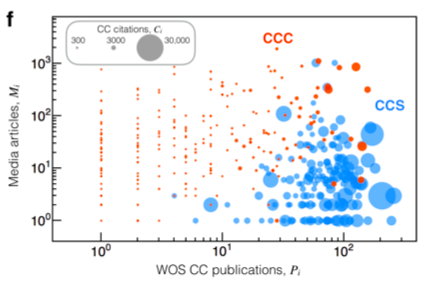 We juxtapose 386 prominent contrarians with 386 expert scientists by tracking their digital footprints across ∼200,000 research publications and ∼100,000 English-language digital and print media articles on climate change. Projecting these individuals across the same backdrop facilitates quantifying disparities in media visibility and scientific authority, and identifying organization patterns within their association networks. Here we show via direct comparison that contrarians are featured in 49% more media articles than scientists. Yet when comparing visibility in mainstream media sources only, we observe just a 1% excess visibility, which objectively demonstrates the crowding out of professional mainstream sources by the proliferation of new media sources, many of which contribute to the production and consumption of climate change disinformation at scale.